A Heroine of the Revolutionary War 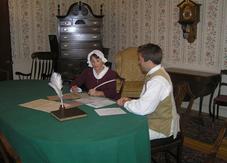 Deborah Samson was a self driven woman with many life goals that kept her on the move throughout New England, New York and beyond. 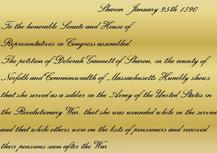 What was written about her gives us some amazing insights, of her character and  situation in life.

Our Patriot Deborah Samson, stands tall!  She is unafraid!

A Rose by any other name would smell as sweet.  William Shakespeare)

But our Deborah was a Samson....

siblings are "scattered" by their mother. (Deborah Bradford Samson.  This was a

legal practice at the time, and helped her mother pay off debt).

1768-1770  Deborah moved to Middleboro, Massachusetts to live with Mrs. Thatcher,

Thatchers tutelage, she learns how to write simple script and spin cloth.  Mrs.

alone in my wretchedness".

indentured servant with Jeremiah and Susannah Thomas, and their five sons.  This

was a patriotic and Congregationalist family.

two  years.  Works at Sproat's Tavern, The Andrew Leach Store and and various

other stores and homes in town, as a Waitress and Spinner.  Leaves

Church of Middleboro.  Her 2nd cousin, Noah Alden, is an elder of this church.

with fictitious name of Timothy Thayer, but was discovered.  Subsequently she is

banished from the 3rd Baptist church and quickly exits town for her own safety,

since this cross dressing offense is punishable by law.

Regiment of the Continental Army, on May 23, 1782, in Bellingham, MA, fulfilling

the town of Uxbridge, MA quota for soldiers.  12 days later...reports to duty at the

cantonment camps in Hudson Valley NY near West Point.  Fights in at least 5

recorded skirmishes with the elite Light Infantry, in New York.  Is wounded in

action.  Volunteers to suppress a mutiny of discharged (unpaid) veterans, in PA.

(while disguised as a man).   Catches malignant fever in Pennsylvania, and almost

dies in Philadelphia.  Her sex is discovered by Dr. Barnabas Binney who writes

letter explaining Deborah's true identity, to her officers.  She returns with the

letter, to West Point and is honorably discharged; October 23, 1783.

1783-1789  Deborah Samson, ventures to Stoughtonham to live with her mothers sister (Aunt

of Sharon, MA, at aunt Alice and Zebulon Waters home, on Bay Rd. in Sharon.  Has

3 children, and adopts a 4th child.  Teaches school in town of Sharon

1791-1792  Appeals to Massachusetts Legislature for compensation for her Army services.  On

she should have received as a soldier during active duty, but never received.

Her request was approved by John Hancock.

mogul in Dedham) and publishes "Memoir of an American Young Lady".  (Later

called The Female Review).  He then ghost-rights her speech for lecture tour.

Meets Philip Freneau, a poet of the American Revolution, who writes an ode in her

honored guest of several of her former officers, like Captain George Webb, of

family, after meeting her at Cobbs Tavern; by writing a letter on her behalf, to

secure veterans pension for her.

passed.  She petitions for eligibility and her pension is increased to $96 per year.

by her son.  Its affectionately called "Earls Mansion"

(her invalid (wounded in action) veterans pension payments).  Her request is

occasions) as "the widower" of this female Revolutionary Soldier, from 1827-1837.

He dies in 1837 weeks before special legislation is passed in his favor.  Heirs of Ben

and Deb request $466 awarded compensation.  Their request is granted, by special

Samson Day, and names her the State Heroine of Massachusetts.  Gannett